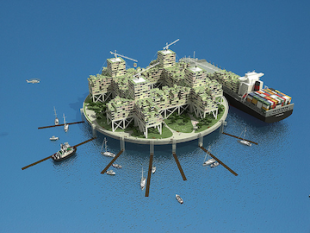 Seasteading Institute city design (Anthony Ling)
Pay Pal founder and early Facebook investor Peter Thiel has given $1.25 million to an initiative to create floating libertarian countries in international waters, according to a profile of the billionaire in Details magazine.
Thiel has been a big backer of the Seasteading Institute, which seeks to build sovereign nations on oil rig-like platforms to occupy waters beyond the reach of law-of-the-sea treaties. The idea is for these countries to start from scratch--free from the laws, regulations, and moral codes of any existing place. Details says the experiment would be "a kind of floating petri dish for implementing policies that libertarians, stymied by indifference at the voting booths, have been unable to advance: no welfare, looser building codes, no minimum wage, and few restrictions on weapons."
"There are quite a lot of people who think it's not possible," Thiel said at a Seasteading Institute Conference in 2009, according to Details. (His first donation was in 2008, for $500,000.) "That's a good thing. We don't need to really worry about those people very much, because since they don't think it's possible they won't take us very seriously. And they will not actually try to stop us until it's too late."
The Seasteading Institute's Patri Friedman says the group plans to launch an office park off the San Francisco coast next year, with the first full-time settlements following seven years later.
Thiel made news earlier this year for putting a portion of his $1.5 billion fortune into an initiative to encourage entrepreneurs to skip college.
Another Silicon Valley titan, Amazon founder Jeff Bezos, announced in June that he would be funding the "Clock of the Long Now." The clock is designed to keep ticking for 10,000 years, and will be built in a mountain in west Texas.
Posted by Veritas Radio with Mel Fabregas at 1:25 PM No comments: Links to this post

Freeman on Veritas - Obama, Masonic Symbols, and Other Secrets Hidden in Plain Sight


S y n o p s i s
Among other things conveyed during this mind-bending and information-rich discussion with radio host, producer and lecturer, FREEMAN, we find out that:
One's choice of vocation may be genetic memory. Freeman was avidly interested in UFOs and the occult throughout childhood, yet it wasn't until college age that he stumbled upon the fact that his father was a life-long Freemason who "chased UFOs for Project Bluebook." And, that his German mother was a "Nazi youth" sent to France and raised by a healer who "practiced witchcraft" under a full moon.
Freeman's take on what's coming down the pike and his uncanny predictive abilities are the result of an ability to synthesize seemingly unrelated information. "Predictive programming" is everywhere, he says. A good observer will see evidence of a well-developed plan (leading toward total global control) throughout Hollywood, the media, our government, NASA, education, monetary policy, world politics, and the ubiquitous symbolism of secret societies.
George H.W. Bush is the "emperor of the fallen angels...the beast." His son, George W. Bush, is a fallen angel. His wife, Barbara Pierce Bush, is likely the daughter of Aleister Crowley, the well-known, ritual-performing, nihilistic cult figure of the last century.
Be forewarned: Like 9/11, October 13th is a significant, recurrent, predictable date for catastrophe as message. So is the 4th of July. "Symbolic gestures" will alert one to the year those dates will be implemented.
The excruciating embarrassment that was the exposure of Bill Clinton's sexual transgressions with Monica Lewinsky was "psychological warfare," arranged and carried out to diminish the office of the presidency. It was part of a chain of events meant to dispirit Americans about democracy as a system, and about the effectiveness of voting for anyone at all.
"What they are attempting to do right now is to make America Satan. They are encoding satanic gesture into everything we do." Witness the humiliating things we see Americans doing on TV. (He mentions Jersey Shore.) "The idea is to turn everyone against America so it can be the next Nazi regime to be taken down, to form this global dictatorship."
A lot of the truth movement is unwittingly participating in this psychological warfare against America, by propagating material fed to it, engendering a "violent patriotism." They are being duped by the Illuminati.
Focusing on "the mind games that are going on" is unproductive. "You can't stop these things; not by protest or political implementation. It's a spiritual problem, not a political one."
In this interview you'll experience all of the above and more of Freeman's unique take on the world. He also talks about CERN, HAARP, Obama, mind-transfer technology, bombing the moon, Canberra, Pine Gap, the Tree of Life, synchronicity...
B i o
Freeman, is the host of Freeman TV, and has been witness to phenomenon that some men only dream of. His natural curiosity necessitated voracious studies of high weirdness which have led him to discover the hidden code behind corporate logos, the secret of ancient astronauts, while finding time to investigate HAARP and chemtrails. Freeman is an internationally-known award-winning TV producer, film maker, radio talk show, and is considered an expert and has lectured extensively in the fields of the occult, Templar history, secret signs and symbolism of Freemasonry, the ancient astronaut hypothesis, trauma-based mind control, and government cover-ups. Freeman publicly announced his fears that a false flag event would occur on 9/11, that "W" would be forced into office, the economy would collapse on 10/13 and that the next President of America would have his natural born status questioned.
To listen to the entire show and all of our show subscribe at:
http://www.veritasshow.com/subscribe.html
Posted by Veritas Radio with Mel Fabregas at 3:07 PM No comments: Links to this post


S y n o p s i s
Australian musician, artist and radio host Max Igan eloquently and clearly paints a fascinating picture of the world we think we know but don't. It isn't run in a way that benefits human beings. None of it makes any sense, he says. Our system of money, of paying to be alive, is detrimental to human well-being and unnecessary. Fear and forced service-to-self stand in the way of our evolution, both individually and collectively.
Waking up to these basic truths, unifying in service to creation and to one another is the answer, Igan says.
Here is a smattering of what he conveys in this densely packed discussion:
The pyramids is a huge message to humanity that nothing is what they tell us it is. Nothing they've told us about history is true, nor about the present. The trick is finding out what IS true.
The world we live in is insane. All the problems we have can be dealt with by people realizing who they are, by changing their perspective of reality.
All I can do is speculate about who's in charge, but the more I look at the research...what's the eye in the pyramid? It's the moon. There is some strange stuff going on up there.
But it doesn't matter who or what is in control. It's about division -- about controlling the human race. All we have to do is unite and we can deal with it. Human unity is the key to the whole thing. Everything in this system is designed to keep people divided and prevent them from ever finding out who and what they are, prevent them from finding their connection to each other.
If we live our lives in service of creation -- one's self, friends, family, the Earth, and you can literally change reality. Ultimately all of us are to blame. Those working within the system believe it's all real. It's a complete dream we've got to snap out of.
Armageddon actually means "the revealing." The battle is within. People's shadows -- the darker side of themselves - are emerging more and more, things they haven't dealt with.
What's going to happen in 2012 is anybody's guess. The Mayans say in 2012 the Sun begins to cross the dark rift. That takes 20 years, and somewhere within that rift is a portal that will change this reality. The energy does seem to be changing, but the outcome depends on people, I think, as we collectively affect our reality. We can create whatever we want.
Don't we employ the government to look after the people, to act on our behalf? They enact legislation that takes our rights away from us. They are acting in breach of trust. We don't employ them to remove our rights. Humankind needs to be allowed to be all we can be.
People are waking up to how corrupt the system really is. There is no real freedom anywhere on Earth. We could have a government of philosophers and artists, a group of elders.
The world is in a messed up state, a lot of which can be traced to the money system. We need to cancel all debt right now. The monetary system has created shortage in the world and created the dog-eat-dog, psychopathic mentality that modern society now has. We don't need a dishonest system that knowingly enslaves us to a corrupt system.
The New World Order is already here. We need an absolute change, but we don't need a global government. We need a group of elders, unity amongst people, administrators who will look after the infrastructure. We need a global awakening -- to see the power people have within themselves to effect change. We are being shepherded into a place where we shouldn't be. We need to address this money supply -- the most important factor of control that's in place, and the interest on money.
Every country George Bush mentioned as the axis of evil countries had no central bank. The war on terror is about installing a central bank in each of those countries. It's about enslaving people to debt -- economic hit men. We need to wake up to it; to stand up to it.
Lead by example, be the change you want to see...you empower those you come across and they start to look into things themselves. Truth isn't told, it's realized.
Unity is the answer to everything. All the problems we face are symptoms of the divided state of human consciousness.
Catch Igan on AmericanVoiceRadio.com show Surviving the Matrix. His website is TheCrowHouse.com
To listen to the entire interview, subscribe here:
http://www.veritasshow.com/subscribe.html
Posted by Veritas Radio with Mel Fabregas at 1:51 PM No comments: Links to this post