What Causes Green Potato Chips and are They Really Poisonous? 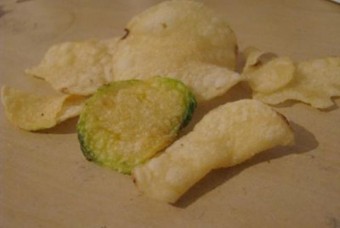 Every once in a while — less often than a few years ago — you’ll open a bag of potato chips and see one which isn’t like the others. It’s green-ish, especially around the edges. It is safe to eat, though it is poisonous. Confused?  Read on!

Potatoes grow underground and are shielded from sunlight — usually. Sometimes, parts emerge above ground, and those sections turn green as chlorophyll develops. And for this to happen, the light need not be natural light. Most green potatoes don’t make it to the stores — be it in the produce section or in crinkly foil bags — for a variety of reasons, but really, who wants to eat a green potato?

That said, on occasion, a green-tinted potato may find its way into a potato chip factory and, eventually, a slice thereof may sneak into a bag of chips. (It’s less and less likely though, due to advances in technology. Here’s a video showing how potato chips are made in a large factory setting; if you fast-forward to about 2:50, you’ll hear about the cameras used to identify and reject flawed chips.)

For the rest of the story: http://www.todayifoundout.com/index.php/2013/06/what-causes-green-potato-chips-and-are-they-really-poisonous/?utm_source=feedburner&utm_medium=feed&utm_campaign=Feed%3A+TodayIFoundOut+%28Today+I+Found+Out%29
Posted by Susan at 12:14 PM