Coke is the most valuable brand in history and "Coca-Cola" is the world's second-most recognized word after "hello." However, the beverage itself is an absolute poison to the human metabolism. Coke is very close to the acidity level of battery acid and consequently it can clean surfaces equivalent to and often better than many toxic household cleaners. 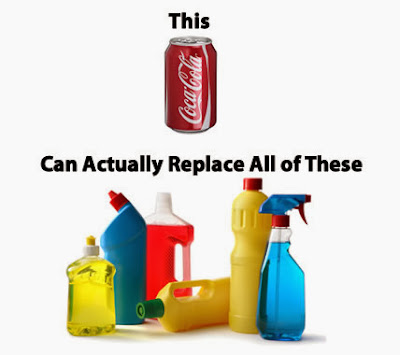 It's cheaper and easier to buy Coke in some third world countries than it is to access clean water. Coke uses "public relations propaganda" to convince consumers and entire nations that it is an "environmental company" when really it is linked to pollution, water shortages, and disease.

A study published in the journal Respirology reveals that soft drink consumption is associated with lung and breathing disorders including asthma and chronic obstructive pulmonary disease (COPD).

The carbonation in Coke causes calcium loss in the bones through a three-stage process:
But, the story doesn't end there. Another problem with most Coke is it also contain phosphoric acid (not the same as the carbonation, which is carbon dioxide mixed with the water). This substance also causes a drawdown on the store of calcium.

So Coke softens your bones (actually, they make them weak and brittle) in three ways:

For the rest of the story: http://preventdisease.com/news/13/110613_Uses-For-Coke-Proves-It-Does-Not-Belong-In-Your-Body.shtml
Posted by Susan at 1:08 PM