Did the Nazis steal the Mona Lisa?

The extraordinary tale of the Nazi art thieves believed to have stashed the world's most famous painting in an alpine salt mine. 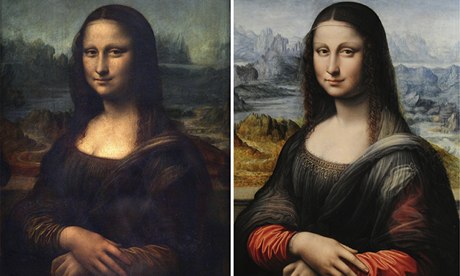 Can you spot the original? One of many copies of da Vinci's Mona Lisa is housed at Madrid's Prado Museum. The original appears on the left. Photograph: Jean-Pierre Muller-Javier Sorian/AFP/Getty Images

With the recent discovery in Munich of €1bn (£860m) worth of art looted by the Nazis, and the forthcoming release of a feature film, starring George Clooney, based on the exploits of the Monuments Men, it is a fitting time to recall how fortunate we are that so much art survived the second world war. The Nazi art theft division, the ERR (Einsatzstab Reichsleiter Rosenberg), was responsible for the theft of around 5m works: from the Louvre, the Uffizi and countless churches, galleries and homes. From headline-grabbing works like Michelangelo's Bruges Madonna to the most frequently stolen artwork in history, Jan van Eyck's Adoration of the Mystic Lamb, both of which feature in the Clooney film, to lesser-known gems that nevertheless held a place in the hearts of museumgoers or families, the story of art looting during the second world war is a tree with countless roots. Each masterpiece has its own history, a provenance ripe with intrigue. Few of the individual stories have been told, fewer still in depth.

Among the many enduring mysteries of this periodis the fate of the world's most famous painting. It seems that Leonardo da Vinci's Mona Lisa was among the paintings found in the Altaussee salt mine in the Austrian alps, which was converted by the Nazis into their secret stolen-art warehouse.

For the rest of the story: http://www.theguardian.com/artanddesign/2013/nov/12/nazis-steal-mona-lisa-louvre
Posted by Susan at 12:05 PM