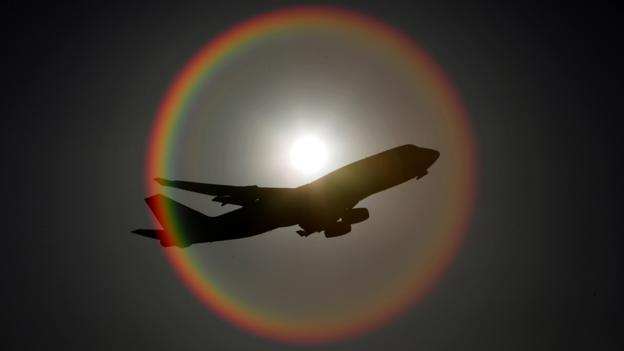 We’re bombarded with the radiation of supernovae and other cosmic sources when we fly – how concerned should we be?
One day, shortly before boarding a flight from Paris to Montreal, I began to think about the risks of flying for the first time. It was not the fear of engine failure or crashing into a mountain that worried me. Rather I realised I was about to make my 39th plane journey of the year, and as a result was exposing myself to higher than normal levels of radiation from space.

Like most holidaymakers, I had checked the weather forecast. But now, as I waited to board the plane, I wondered whether I and other frequent flyers should be more concerned with checking the space weather before we take off.

The Earth is constantly being bombarded by high speed, sub-atomic particles. These interact with the atmosphere and our planet’s magnetic field to generate cosmic radiation which rains down on us. Our exposure levels rise when we travel by plane, especially at higher altitudes and latitudes.

What do scientists know about the dangers that cosmic radiation might pose during regular flights, and is there anything that aviation authorities or passengers can do to minimise risk?

Cosmic radiation consists mainly of protons and helium nuclei that originate outside our galaxy. Scientists have long speculated over their origins, with likely candidates being powerful events such as star collisions, gamma ray bursts, black holes and supernovae – explosions that mark the death of large stars. Earlier this year US astronomers concluded supernovae were indeed a significant source of cosmic radiation hitting Earth. Particles thrown out by our Sun are another source.