Volcano discovery hints at fire below ice in Antarctica 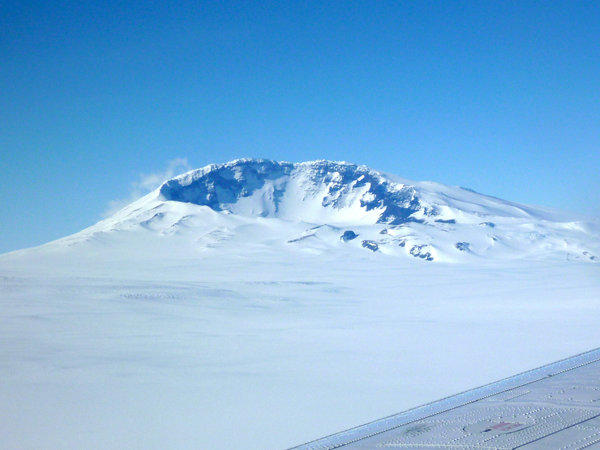 Mt. Sidley is the youngest of a chain of volcanoes looms over the ice sheet in Marie Byrd Land in western Antarctica. (Douglas Wiens / Washington University, St. Louis / December 11, 2011).

A volcano may be stirring more than a half-mile beneath a major ice sheet in Antarctica, raising the possibility of faster base melting that could ultimately affect climate.

Seismologists working in a mountainous area of Marie Byrd Land in western Antarctica detected a swarm of low-magnitude earthquakes in 2010 and 2011 similar to those that can precede volcanic eruptions, according to a study published online Sunday in Nature Geoscience.

The area of activity lies close to the youngest in a chain of volcanoes that formed over several million years, and the characteristics and depth of the seismic events are consistent with those found in volcanic areas of Alaska’s Aleutian Islands, the Pacific Northest, Hawaii and Mt. Pinatubo in the Philippines, the study concludes.

The tight focus of the 1,370 tremors and their deep, long-period waves helped researchers rule out ice quakes, glacial motion or tectonic activity as causes. So, too, did their apparent depth: At 15-25 miles beneath the sub-glacial surface, they are close to the local boundary between Earth’s crust and mantle.