What if the Big Bang was really the “Big Bounce”?

Primordial inflation data may provide a clue to a unified quantum gravity. 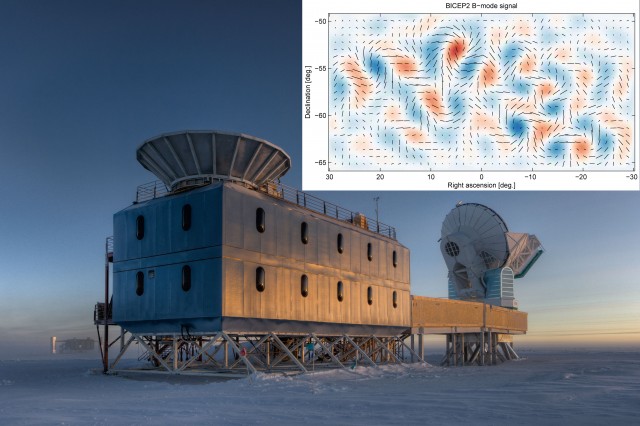 The BICEP telescope and some of the data it has generated.

Not so long ago, our very own Matthew Francis attended the press conference in which results were announced from Antarctic observatory BICEP 2. Researchers claimed that the instruments there had located the unmistakable signature of gravitational waves during primordial inflation—a period of time during which the Universe expanded at a furious rate.

But our initial article also hinted at trouble to come.

The BICEP 2 experiment measures the ratio between light scattered by gravitational waves and light scattered by everything else, which shows up in the polarization of the cosmic microwave background (CMB) radiation. BICEP 2, however, is not the only instrument that can measure the properties of the CMB. Scientists have used the Planck satellite to measure the same ratio of light scatters—and guess what? The value obtained from BICEP 2 data doesn't agree with the value obtained from the Planck data.

Under these circumstances, we're faced with two possibilities: either one set of experimental data has not been interpreted properly or the Universe plays by unexpected rules. These possibilities are not mutually exclusive, providing lots of room for an interesting range of explanations. Under these circumstances, theoretical physicists tend to get a bit wild around the eyes and start stocking up on food, water, paper, and pencils. Once they are in their safe place, they let their imaginations run wild...

A group of Chinese and Canadian physicists asked themselves if a bouncing Universe might explain both the BICEP 2 and Planck results. A bouncing Universe is a consequence of loop quantum gravity, an attempt to unify quantum mechanics and relativity. One neat feature of loop quantum gravity is that, when the Universe is dense, gravity becomes repulsive. This means that inflation occurs naturally and doesn't require additional physics.

For the rest of the story: http://arstechnica.com/science/2014/07/what-if-the-big-bang-was-really-the-big-bounce/
Posted by Susan at 2:58 PM