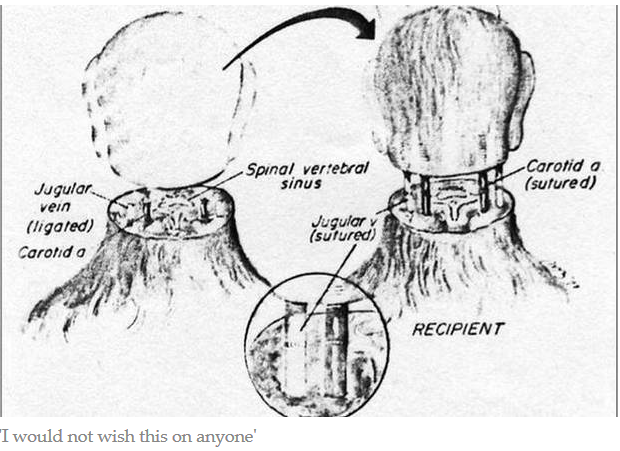 Yesterday, 30-year-old Russian man Valery Spiridonov volunteered to become the first person in the world to undergo a complete head transplant. Literally his entire head. On a different body.

The operation will be carried out by Italian surgeon Dr Sergio Canavero, in what he expects to be a 36-hour procedure involving 150 doctors and nurses.

A Werdnig-Hoffman disease sufferer with rapidly declining health, Spiridonov is willing to take a punt on this very experimental surgery and you can't really blame him, but while he is prepared for the possibility that the body will reject his head and he will die, his fate could be considerably worse than death.

"I would not wish this on anyone," said Dr Hunt Batjer, president elect of the American Association for Neurological Surgeons.

"I would not allow anyone to do it to me as there are a lot of things worse than death."

For the rest of the story: http://www.independent.co.uk/news/science/man-undergoing-head-transplant-could-experience-something-a-lot-worse-than-death-says-neurological-expert-10164423.html?cmpid=facebook-post
Posted by Susan at 12:50 PM