Pentagon Admits They Are Preparing For Mass Civil Breakdown 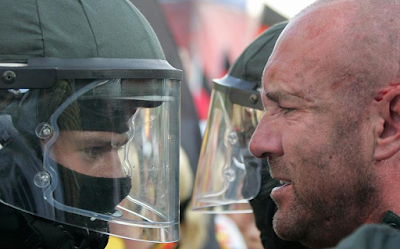 A new US Department of Defense (DoD) research program admits that the Pentagon has long been concerned about widespread social break down. Even more striking of an admission is the fact that they have been funding universities to create models of the dynamics, risks and tipping points that would all be part of large-scale civil unrest in the United States.

The DoD program was funded under the overarching authority of a number of US military agencies.

This program, costing millions of dollars, has been designed for the purposes of immediate and long-term “warfighter-relevant insights” development. The Pentagon explains that the purpose is for senior officials and decision makers in “the defense policy community” to form a contingency plan in the event of wide scale social unrest.

The recently revealed documents add that the purpose is further to inform policy implemented by “combatant commands.”

This all started back in 2008 when the global banking crisis formed the impetus for the DoD “Minerva Research Initiative“.

The DoD then decided to partner with universities in order “to improve DoD’s basic understanding of the social, cultural, behavioral, and political forces that shape regions of the world of strategic importance to the US.”

One of the products of this was a Cornell University-led study which was managed by the US Air Force Office of Scientific Research. It aimed to develop a model “of the dynamics of social movement mobilization and contagions.”

For the rest of the story: http://countercurrentnews.com/2014/07/pentagon-is-preparing-for-mass-civil-breakdown/
Posted by Susan at 12:19 PM