Lisette Larkins I Transforming Our World with the Help of Enlightened Beings (E.T.) 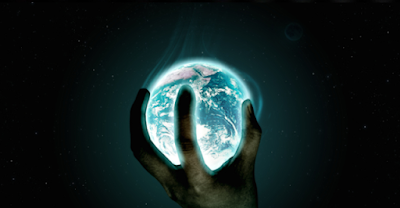 Just about everyone thinks that the human race is in some sort of trouble. What kind depends on your point of view. Environmentalists focus on the damage we are doing to the planet. Bible fundamentalists believe that Armageddon is close and that famine, plague, and war will soon destroy the majority of humanity. The political left or right believes that their opposition is taking us on a path to disaster. Others believe that we are about to undergo a quantum evolutionary leap, a spiritual awakening that will compel us to reexamine our place in the universe and to rediscover who we really are.
B i o

After her initial surprise at being contacted by extraterrestrials, for more than three decades of contact experiences, Lisette Larkins has been implementing her ET mentors' counsel. As a result, she lives a dream life in Malibu, California, training at Cross Fit, volunteering with her therapy dog Kelly, writing new books, speaking and lecturing on abundance creation, creating new projects, and enjoying a life filled with laughter, abundance, and joy. Lisette says that We are designed to be Creative Beings! When we are not in the process of creating, we are actually spiraling downward. But we cannot create what we want when we are not feeling good.
Posted by Susan at 7:00 PM No comments: Links to this post To most people, the music industry represents a source of harmless fun and entertainment. Beneath the glossy veneer, however, lies the devastating truth of who really controls these institutions, and the deeply malevolent agendas for which they're being used. Mark Devlin is a long-standing DJ and music journalist. 'Musical Truth'" is the culmination of his five years" of research into the true nature of the industry and its objectives-from dark occult rituals, to mind-controlled artists, and all points in between. The book shows how these agendas fit into the much wider picture of what's really going on in the world, and crucially-how the power lies with us to bring it to an end.

Mark Devlin is a UK-based club and radio DJ, music journalist and author. Since 1990 he has played gigs all over the UK, and in over 40 countries around the world. In 2010, he underwent what he refers to as a conscious awakening, bringing a new awareness of what's really going on in this world. His special area of interest was how this ties into the mainstream music industry, and the way in which A-list artists have been used to manipulate and mind-control the masses in line with a much larger agenda. He now presents public talks on these subjects, as well as appearing on radio, and producing two regular podcast series. In early 2016 he published his book, 'Musical Truth.'
Posted by Susan at 7:00 PM No comments: Links to this post Tonight, we discuss The Unholy Feminine: New-Feminism And The Satanic Epi-Eugenics Agenda. Before we begin, nothing in tonight's interview "new," or uniquely "his"  information. As the old saying goes: There is nothing "new" under the sun. This means that Truth is objective and eternal. Reality remains a reality regardless of whether or not it is recognized and accepted as such. All he can do is present the information in a personalized framework with his particular style.

If you're easily offended, Don't listen to this interview.! His presentation style is often extremely intense, and at times, even combative. He doesn't sugar-coat his words or his delivery. Some of you may very likely become upset or angered by some things you will hear him say during this interview. So be it. Truth itself, by its very nature, is belligerent, because it wages war against all forms of deception and mind control.

He does not present this information to be lied, to be popular, to make money, or to make friends. He speaks publicly only because he recognizes that, in a time of such overwhelming ignorance and deception, the fact that he understands such information regarding what is taking place in our world places him in a position of moral obligation to communicate it to others, in an attempt to help them to understand it as well, and to encourage them to do something about it.

Mark Passio is an independent researcher, public speaker, radio talk show host, conference organizer and freedom activist from Philadelphia, PA. Mark has undertaken the task of assembling vast amounts of research in the areas of metaphysics, occultism, spirituality, symbology and consciousness studies. In 2007, Mark began presenting this information in the form of a presentation series titled What On Earth Is Happening, with the intention of bringing the implications of this body of knowledge to greater public awareness. In 2010, Mark began hosting his own weekly internet radio show, also called What On Earth Is Happening, which is now broadcast live every Sunday on the Oracle Broadcasting network. Mark is also one of the co-hosts of Free Your Mind, the Philadelphia-based conference on consciousness, mind control and the Occult.
Posted by Susan at 7:00 PM 1 comment: Links to this post Tonight, we discuss politics, banking, money, education, health, and more, from a very different perspective. If you choose to listen tonight, you will do so at your own risk. Because, after all, you're a victim too, you just might not know it. But i personally refuse to engage in victimhood mentality. I refuse to give in our power or my devotion to anything or anyone. That is why we discuss what others refuse or ignore.

Leonardo Wilde is an author, director, and screenwriter with 11 books and 200 published articles as well as 42 produced scripts. Although he wears many hats, writing has been his livelihood and passion since age twelve. Currently the CEO and co-owner of a company dedicated to environmental solutions, Wild has traveled extensively: sailed across the Atlantic and the Pacific--was the skipper of a million-dollar yacht at the age of 24 in New Zealand and in 1989 survived a cyclone Harry, a Category 4. He walked three times over the Andes into the Amazon jungle with Native Indians, took part in gold survey expeditions in Ecuador's rain forests, cycled across South America, built wooden houses, advised Ecuador's Central Bank on currency design; these, and many other experiences, are invariably being weaved into my writing.
Posted by Susan at 7:00 PM No comments: Links to this post Through the ages every generation has had to face difficult challenges. At this point in time, these challenges have taken on extreme proportions, on a scale never seen before. When faced with threats and intimidation, most individuals have chosen to lower their eyes, take a step back and accept the oppressors. Others have given up, believing that nothing can be done to change the outcome and that the best thing is to bury their heads in the sand, pretending that everything is okay. Anxiety, hopelessness, frustration and despair have become a mainstream way of living.

Tonight we will have a candid conversation about the social engineering of the twentieth century, how it led to our planet being terraformed almost without our knowledge and what we can do about it. It's not as hard as you think. The side effects of global medical experimentation are devastating and fatal unless we act. Is Babylon falling?

It was in 1923 that the Frankfurt School began its work. Though it was not exclusively responsible, the cultural revolution which it inspired starting in the 1950s developed in the US and then Europe. About 20 years later, the cultural revolutions of 1968, under the influence of Marcuse, mark an important stage. About another 30 years after 1968 would be needed to see the triumph of the counter-culture which began 80 years earlier. We are dealing with a long-term, brilliantly conceived, deeply sinister operation. The men of thought and action who devised it had the foresight to understand what had to be done and to carry it out consistently by selecting priority sectors-universities, music, media broadcasting, psychological and educational action- to put at their service the networks which were offered to them. They succeeded beyond their wildest dreams. To further the advance of their 'quiet' cultural revolution - but giving us no ideas about their plans for the future - the School quite literally recommended (among other things):

1. The creation of racism offences.

3. The teaching of sex to children

4. The undermining of schools' and teachers' authority (this happened in the 1960s and thereabouts. However, the school as in loco parentis is back in a big way.)

6. The promotion of excessive drinking

8. An unreliable legal system with bias against victims of crime

9. Dependency on the state or state benefits

10. Control and dumbing down of media 11. Encouraging the breakdown of the family

Every empire that has fallen was destroyed from within.  Listen for more for solutions...


Cara St.Louis is a writer, teacher, activist and speaker hailing from the American Southwest, infused with the old spirit of the sovereign individual. She has been and continues to be committed to Waldorf School's teaching, which is a pedagogy centered around protecting the Imagination of the human being. She has been a journalist for such publications as Veterans Today and is the author of several books including Consolata's Companion, about the dark side or archontic presence in our lives. The Sun Thief is a thinly fictionalized thriller about the murder of her mother who had a top Navy security clearance, and a pilot who steals a chemtrail plane. Dangerous Imagination, Silent Assimilation is the paradigm shifting book which flings the doors open to expose the vast coordinated manipulations to control and dominate humanity. She is a former producer at The People's Voice TV in London. Currently, she is at work on two projects: One is the follow-up to Dangerous Imagination. It is called The Workbook and is a series of stand-alone episodes, if you will. The first is out and is called False History, The Great Remembering. She has a project on the Celtic Hearth upcoming with master dowser and monolith theoretician, Maria Wheatley...also the daughter of novelist Dennis Wheatley. She has been a regular at International conferences this last few years, including one upcoming at the Bases Project in England in August. She will be speaking in Vienna in a few weeks on the kidnapping of our children by the government. In late July, she embarks on a lecture tour Down Under.
Posted by Susan at 7:00 PM No comments: Links to this post