Gabor Mate, M.D. | When the Body Says No: Exploring the Stress-Disease Connection 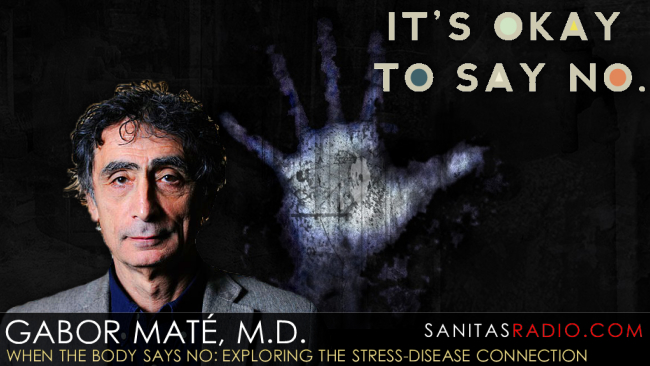 
This is an encore presentation courtesy of Sanitas Radio.


Can a person literally die of loneliness? Is there such a thing as a "cancer personality"? Drawing on scientific research and the author's decades of experience as a practicing physician, this book provides answers to these and other important questions about the effect of the mind-body link on illness and health and the role that stress and one's individual emotional makeup play in an array of common diseases.

Explores the role of the mind-body link in conditions and diseases such as arthritis, cancer, diabetes, heart disease, IBS, and multiple sclerosis

An international bestseller translated into fifteen languages, When the Body Says No promotes learning and healing, providing transformative insights into how disease can be the body's way of saying no to what the mind cannot or will not acknowledge.


A renowned speaker, and bestselling author, Dr. Gabor Maté is highly sought after for his expertise on a range of topics including addiction, stress and childhood development.

Rather than offering quick-fix solutions to these complex issues, Dr. Maté weaves together scientific research, case histories, and his own insights and experience to present a broad perspective that enlightens and empowers people to promote their own healing and that of those around them.

For twelve years Dr. Maté worked in Vancouver’s Downtown Eastside with patients challenged by hard-core drug addiction, mental illness and HIV, including at Vancouver’s Supervised Injection Site. With over 20 years of family practice and palliative care experience and extensive knowledge of the latest findings of leading-edge research, Dr. Maté is a sought-after speaker and teacher, regularly addressing health professionals, educators, and lay audiences throughout North America.

As an author, Dr. Maté has written several bestselling books including the award-winning In the Realm of Hungry Ghosts: Close Encounters with Addiction; When the Body Says No: The Cost of Hidden Stress; and Scattered Minds: A New Look at the Origins and Healing of Attention Deficit Disorder, and co-authored Hold on to Your Kids. His works have been published internationally in twenty languages.

Dr. Maté has received the Hubert Evans Prize for Literary Non-Fiction; an Honorary Degree (Law) from the University of Northern British Columbia; an Outstanding Alumnus Award from Simon Fraser University; and the 2012 Martin Luther King Humanitarian Award from Mothers Against Teen Violence. He is an adjunct professor in the Faculty of Criminology, Simon Fraser University.
Posted by Susan at 9:00 AM No comments: Links to this post Our discussion goes far and wide and encompasses worldwide astrological predictions for the rest of 2017 and 2018.

▓ Is the erasing of our history planned. Has this become institutionalized forgetfulness?

▓ Will there be another financial collapse unlike any we have ever seen? Could it be a greater depression?

▓ Could someone in the Middle East who has recently gained unprecedented power and has already began a war, be the so called Antichrist? He will turn 33 next year. The sands are shifting and the battle lines are being drawn.

▓ The interview is 2.5 hours long. John was kind enough to extend the interview an additional 30 minutes.

This is John Hogue's first appearance on Veritas.

From Nostradamus: "A "young dark man" will arise as a leader in a Third World country; his main goal is to unite the other Third World countries to do battle with the superpowers. The area of conflict will be in eastern Europe and the Middle East, particularly around the Adriatic and the Caspian seas and the eastern Mediterranean. No definite winner will emerge but the strife will help set the stage for the Antichrist. Some prophecies in the Bible refer to events in this region (Israel will be involved)." I wouldn't consider Saudi Arabia a "third world country" except by the treatment of its citizens, but Defense Minister and Deputy Crown Prince Mohammed bin Salman will likely become King of Saudi Arabia in the next few days. He has arrested several key figures and has already ordered all of its citizens out of Lenanon. The sands are shifting and the battle lines are being drawn. Watch this closely. Perhaps "they" are playing out the script sooner than we thought.

John Hogue is author of over 1,000 articles and 44 published books (1,180,000 copies sold) spanning 20 languages. He has predicted the winner of every US Presidential Election by popular vote since 1968, giving him a remarkable 13 and 0 batting average. Hogue is a world-renowned expert on the prophecies of Nostradamus and other prophetic traditions. He claims to focus on interpreting the world's ancient-to-modern prophets and prophecies with fresh eyes, seeking to connect readers with the shared and collective visions of terror, wonder and revelation about the future in a conversational narrative style. Hogue says the future is a temporal echo of actions initiated today. He strives to take readers --back to the present--ÃƒÆ’Ã¢â‚¬Å¡Ãƒâ€šÃ‚Â empowering them to create a better destiny through accessing the untapped potentials of free will and meditation. He has received wide international recognition appearing on over 150 television and over 1,000 blog and talk radio shows on five continents since 1987: North and South America, Asia, Australia and Europe. He has perhaps the most multi-media exposure of any prophecy scholar in his generation and syndicated reruns of his many documentaries and radio appearances air several times each month around the world. His North American Television appearances include:

Prophecies of the Millennium (FOX and FX)

Prophecies of the Millennium (FOX Network)

Weird or What with William Shatner (History Channel).

The Other Nostradamus (History Channel)

The Next Nostradamus (History Channel)

How the World Will End.Nostradamus Episode (AHC)

His international TV and Radio appearances included an interview about the life of Nostradamus on CNN International (500 million viewers) and BBC WORLD Radio (160 million listeners) and Russia Channel One about Papal prophecies of St. Malachy (140 million viewers). He is a frequent and premier guest on one of North America's largest night radio shows, Coast to Coast AM (est. 20 million listeners on internet, blog radio and 650 radio stations across North America and the Caribbean.
Posted by Susan at 9:00 AM No comments: Links to this post

Hillary Raimo | Are We Living in a Social Dystopian Digital Future? Are we living in a social dystopian future where our lives are molded into a digital connection where everyone is constantly rating everyone else and a person's average rating ends up dictating how they're in turn treated by the people around them? Are we becoming addicted to social media validation. Did you know only 4% of the information on the world wide web is available to a search engine? Where is the other 96%.? Did you know artificial intelligence is learning to read your mind and display what it sees: A computer guesses what people are watching based on brain activity. Let's muse the possibilities when we combine intuition, digital age technologies and human consciousness.

An award winning photographer, artist, writer, Hillary Raimo has been a radio host in the truth seeking genre of alternative media for 13 years. Her interviews have included some of alternative history's most well known names such as William Henry, Robert Bauval and Graham Handcock. As well as, more outlandish thinkers such as David Icke, Barbara Hand Clow, Wayne Herschel, Dr. David Lewis Anderson. Her shows offered a public platform to whistleblowers who could discuss topics without censorship, GMOs, Cannibis Laws, the truths of 911, UFOs and cosmic realities of life out there. Her questions are known among her guests as some of the best and well informed. Her show offered a non-scripted glimpse into many brilliant minds and their informational offerings. The Hillary Raimo Show was the #1 most downloaded show on Achieve Radio for almost a decade. One of the few female voices in alternative media early on, her ability to bring out the information in her guests was widely well known and respected.

Author of two books, Hillary has also contributed to and consulted on 16 book publications such as Whose Stuff is This by best selling author Yvonne Perry, Kids Who See Ghosts by Dr. Caron Goode. Hillary is a regular writer for the popular online magazine Rebelle Society and spends time creating inspiring and informative social media content. Her focus being on the realities of life in the digital age, and how consciousness is key to more sustainable living.
Posted by Susan at 9:00 AM No comments: Links to this post