Dr. Bill Deagle, with his unique style, shares his story for those who may not be familiar with his journey. We also discuss DNA Biochips, the history of cataclysms and what triggers them, underground bases, the coronavirus outbreak, and more.

Dr. Bill Deagle MD, is the host with Michelle Deagle of The NutriMedical Report. He teaches in the Academy of Anti-Aging and Environmental Medicine, presenting papers and research on topics from Functional Metabolic Anti-Aging Medicine to Radiotoxicology. His background includes biochemistry, nuclear physics, oceanographic bacterial genetics, and training in Family, Internal, Emergency, Trauma, Burn, and surgical as well as intensive care medicine. He has worked as a physician with government research on Operation Top Off and Dark Winter in Colorado on radiological and bioterrorism prevention and logistics response planning. Dr. Deagle has had high-level security clearance to work at classified projects as a physician for technicians and scientists as well as military officers, special forces and the special Munitions Chemical Forensics Team that examined the Alfred P. Murrah building after the bombing at Oklahoma City in 1995. His experience as a physician for the military at US Space Command, NORAD, and advanced special projects have given him a new perspective in terms of clandestine projects, and the need for bio-protection of US and World populations.
Posted by Susan at 9:00 AM 4 comments: Links to this post

Jucelino Nobrega da Luz | Predictions [Premonitions] for 2020 and Beyond 
If you know me by now, you know I don't believe anything. I either know or don't know. Even though I've had people on my program who claim to predict the future, I bring them on because many of you request them and it's interesting. At the same time, even a broken clock is right twice a day. That being said, a few months ago, one of our listeners had been contacting me to recommend that I interview an alleged gifted psychic from Brazil. This was back in Oct/Nov/Dec 2019.

Unbeknownst to me because a lot of his messages fell through the cracks. I found he was actually sending me information about this person since 2014. Just a few days ago, while conducting pre-interview research, that's what I do when I consider prospective guests, I decided to look into the documents. I WAS perplexed (for lack of a better word) when I read a few of these premonitions had materialized and the timestamp in my inbox was before the events took place. This gets interesting. What surprised me the most about this man is the accuracy, specificity, and clarity of his premonitions. These are not the run-of-the-mill predictions like "there will be a tornado in the Midwest portion of the USA this summer".

These are premonitions with names, exact dates, specific location, etc. I know what some will say. Why didn't you post this before? And I will answer the same way. Because the messages fell through the cracks. This is why I say tonight's program is non-traditional. After I read a lot of the documentation, I made contact with the gentleman. His name is Prof. Jucelino Nabrega da Luz. He is from Brazil. Amazingly, he speaks many languages. He was born in 1960 and has had these premonitory dreams since he was 9 years old. I was told I could have a translator available to conduct a future interview, but I did an interview like that some time ago and it was extremely difficult, and that's when I was the translator myself. So I almost refused to do it.

So I decided to call Jucelino today to get to know him and see if his English was fluent enough in order to conduct a future interview. Our chat was almost an hour long and it's included in segment two. The conversation includes future predictions and you don't want to miss it. Segment one is my commentary on various premonitions have materialized.

What Jucelino sees at any given "time" is accurate for that moment in time. In the astral plane where he visits at night and has the dreams/premonitions, there is no "time" as such. He has told me that he sees events like a movie and whatever language it is in he can understand it. He then writes the letters to whoever he needs to and is given the addresses to post the letters. As events unfold on Earth, as "time" progresses, the energies that manifest the events may change so that what he sees in the premonition may not actually occur on the Earth plane. About 70% do come true, however.
Posted by Susan at 9:00 AM No comments: Links to this post

Do No Harm: 714X - Defying A Hopeless Prognosis Tonight, we are joined by someone fighting a historic spiritual war an all-out assault on our natural God-Given Rights and Right to Life.

We must never stop fighting for the Truth and our Right to choose LIFE by any means available without government force.

Here's a summary of the battlefront he has been on since 1990. What is the type of censorship that kills? Do you know or have family members or friends who suffered and died following failed standard chemo and radiation cancer treatment, and then the death was attributed to cancer? Everyone suspects or has learned there are many 'cures' available blocked by the FDA.

Statistics are obfuscated to manipulate the government and the unsuspecting alike, however, as far as he knows, one out of two is expected to have cancer in their lifetime; this is not a genetic issue. The following applies to both genders, all age groups, and all nationalities and crosses all borders.

The following discussion is about a cure for cancer, AIDS and immune disorders, approved in Canada in 1989 and still covered-up and difficult to qualify for until one is terminal, even then there are hoops to jump through, though available.

Why should this one astounding treatment known as 714X, be the foundation of all cancer and immune disorders? In use worldwide since the 1960s.

714X is harmless and causes the body to reject cancer naturally without side effects, and it's inexpensive. How? By shutting off a hormone that blocks the immune system called human chorionic gonadotropin (hormone) HCG and it's secreted by all cancers, and disables or blocks, the immune system.

Numerous cures exist some since the 1920s, however, Rockefeller originated the American Medical Association, the education indoctrination system, and the origins of big pharma which ruthlessly protects its own treatments and agenda through control of government agency [FDA] and draft laws which Congress is lobbied, sponsored, bribed or pressured to promulgate into law.

Proven low-cost treatments with no side effects are met with intense resistance, blocked and covered up! Doctors, researchers or any who do not toe the line are censured, lose their license to practice, are incarcerated, impoverished and slandered! As was expected his efforts to assist lives from suffering and certain death garnered FDA retaliation.

The FDA raided his office, violated the Constitution to indict him and your Rights to pursue life. FDA charged him with breaking an agency regulation, never promulgated into law.  Therefore, not a law.

Though clearly winning during the first phase of the trial, mysteriously, President Clinton and Chief Justice Wm. Rehnquist summoned the District Court Judge to Washington, who upon return sentenced him to federal prison, and banned his book.

After 20 years, he has republished and updated the book. Nothing has been removed. This is your opportunity to obtain your copy.

At the age of 19, afloat as we all are in a global cacophony of lies, Charles Pixley set upon an intense search for REALITY, which began with the ruthless business of war and 2 tours in Vietnam. In July 1990, came an awareness of several â€œcuresâ€ for cancer which had heretofore been kept intentionally buried since the 1920â€™s by mainstream medicine. The most astounding is 714X a harmless remedy that causes a body to reject cancer naturally without side effects. Mr. Pixley became the tip of the spear to awaken the public option to survive the failure of deadly chemotherapy and radiation as sole treatments and control access and limit payment for treatment to mainstream medicine. Conscious of his oath to defend the Constitution, now awakened to an epic betrayal, enraged set out to expose Big Pharma for their massive insidious crimes, went on the offense to educate anyone able to hear and understand. While Mr. Pixley does not practice medicine, nor is he licensed, he spent 40 years studying the Healing Arts, and received an unorthodox medical education, through old fashioned one on one training with several brilliant MD, Professors of Medicine. To comply with Federal regulations and fully inform the FDA, Pixley founded an Institutional Review Board (IRB), under the laws of Congress, with Chief Investigator Dietmar Schildwaechter, MD, Ph.D., and Robert Atkins, MD, and a dozen other prominent physicians. It is required by USC Title 21, Part 56, the public is required to provide Informed Consent, to comply with Mr. Pixley wrote a book, DO NO HARM Defy a Hopeless Prognosis with Harmless 714X. As was expected efforts to assist lives from suffering and certain death will garner FDA retaliation instead of support and assistance. The FDA raided Pixleyâ€™s office, violated the Constitution to indict him and block your Rights to pursue life. FDA charged Pixley with breaking an agency regulation, never promulgated therefore not a law. Though clearly winning during the first phase of the trial, mysteriously, POTUS Clinton and Chief Justice Wm. Rehnquist summoned the District Court Judge to Washington, who upon return sentenced Mr. Pixley to federal prison, and at the request of the FDA banned the book DO NO HARM. President Trump passed THE RIGHT TO TRY Act, on May 30, 2018. Mr. Pixley, after a 22-year silence, inspired by this Act feels the time is now to present the life-saving knowledge of harmless 714X treatment of cancer, A.I.D.S., and immune disorders. 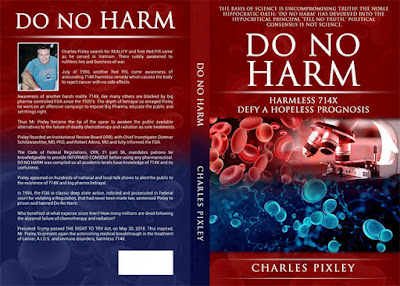 Posted by Susan at 9:00 AM 2 comments: Links to this post Let me begin our first program of the decade by wishing you a very inspirational and blessed New Year. May you always look into the positive side of life to always be thankful for it, but always keeping in mind that no life is perfect, no person is perfect and no year is perfect, and we must learn to embrace everything with its own good and bad. Mistakes and failures are temporary and inevitable. But you have to get back up and keep going. Your time is limited, so don't waste it living someone else's life. Don't be trapped by dogma – which is living with the results of other people's thinking. Don't let the noise of other's opinions drown out your own inner voice. And most important, have the courage to follow your heart and intuition. Happy New Year to you. With that, we begin decoding 2020 with Jeff Harman. Buckle up!
Posted by Susan at 9:00 AM No comments: Links to this post